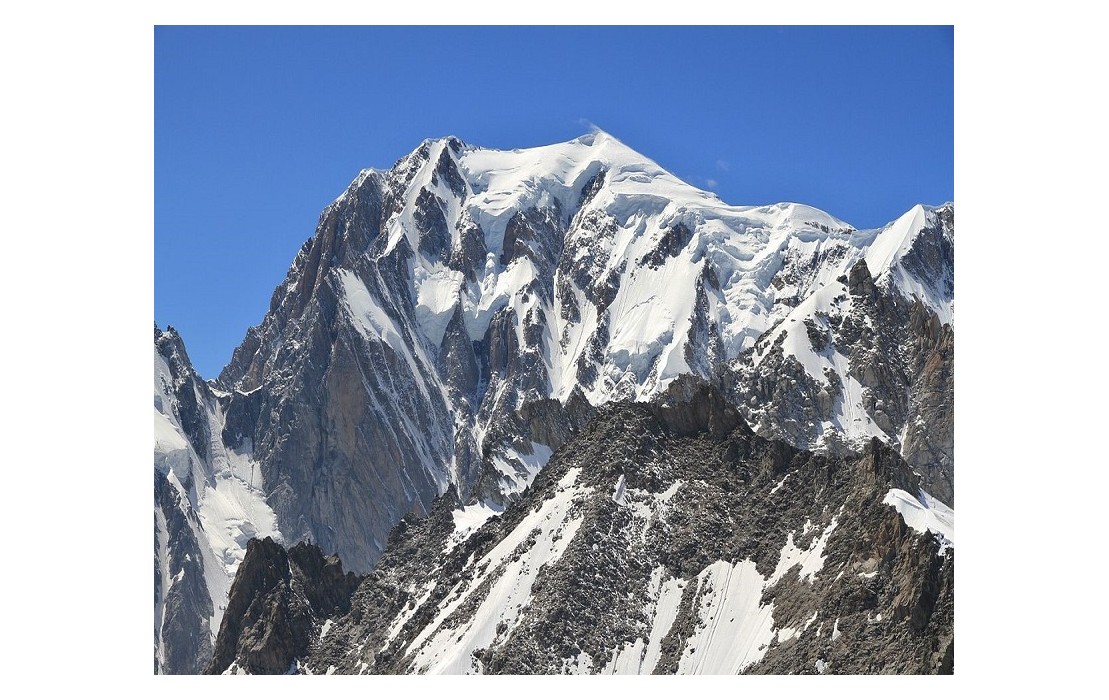 Annecy is a charming town in the French Alps. We are only 80 km to their highest peak, Mont Blanc. We have passed by many times, each time saying that we must finally pass this attraction. Attraction for some, fear in the eyes for others.

Saturday 5 September 2020 it will definitely go down in history with me. On Thursday, September 3, we decided that after so many years of living in the Alps, it's time to see their highest peak, Mont Blanc 4810 m above sea level. There is no option to go up Mont Blanc. Its whiteness, however, can be seen from the nearest mountain Aiguille du Midi at an altitude of 3842 m above sea level.

Aiguille du Midi, it literally means the Southern Spire. This is the summit in the Mont Blanc Massif. It is located on the territory of France in the department of Haute-Savoie. It has two peaks: southern (3,842 m) and northern (3,795 m).

The name of this peak is related to the fact that, when observing it at noon from a town situated at its foot - Chamonix - the sun is centrally towers over Aiquille du Midi.

As a curiosity, the northern peak was first climbed by the Polish alpinist and poet Antoni Malczewski, together with Jean-Michel Balmat and five other guides on August 4, 1818. 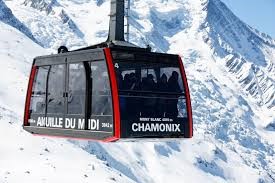 The lift starts at 1035 m above sea level, where Chamonix is ​​located. Very expensive tickets. A normal ticket from Chamonix (return) costs € 63.00 and the entire journey takes approximately 20 minutes. Our tickets were more expensive, with the option of additional attractions.

We bought the tickets for the cable car online, which allowed us to save time and we did not stand in a giant queue at the ticket office. 55-58 people can enter one gondola at a time. 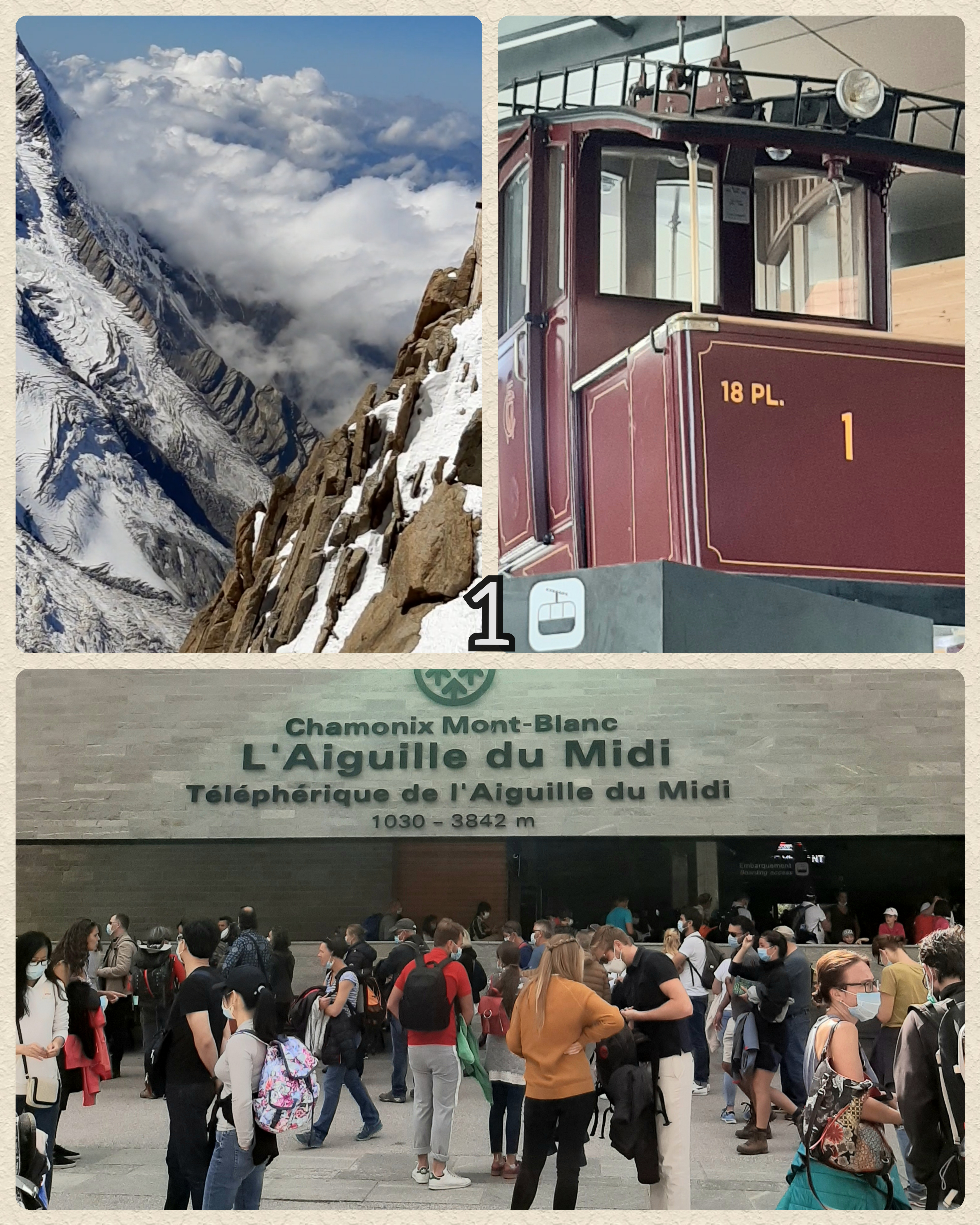 The cable car reaches the top in two stages.

The first station, called Plan de l'Aiguille, is located at an altitude of 2,309 meters above sea level. The gondola covers the second stage very quickly. You can feel the difference between the first and second stages, not only in the frequency of your ear clogging, but also in the way the cable car rides to the top. It feels steeper now, as evidenced by the passengers' frequent shouts of "Oooooooo".

The last station is located at an altitude of 3,778 m above sea level. There you can find a gift shop, a mailbox, a cafe and toilets. On this level, you can also visit three observation decks from which you can admire the view of the highest peaks in Europe. The view is breathtaking. Not only the view, actually. If you go up a few steps, you will feel breathless and dizzy. In such a coin, my admiration for mountaineers and climbers reaches its zenith and I write it in capital letters. While standing on one of the terraces, we noticed a group of climbers, who, connected by ropes, in the snow up to their knees, climbed in goose step by step to the top. Their camp was visible in the distance, gasping for breath before the next climb.

This is not the end of attractions. Although it seems that a better term would be - now the real attractions are just beginning.

Time to see the breathtakingly breathtaking transparent terrace with a beautiful view of Mont Blanc itself. The spire - terrace above the upper cableway station can be accessed (40 m) with an elevator, which is hollowed inside the mountain. The ascent takes 2 minutes, which turns into an original tour inside the rock that can be admired through the glass roof.

We drove in. There was a line for about 60 minutes to stand at the viewing window. It was worth it. This is probably the most exciting viewpoint in the world. The glass box was installed over 3 thousand. m.a.s.l. The glass viewing platform is called "Le Pas dans le Vide", which means "Step into the abyss" in French. The platform was opened in December 2013 and is located almost two meters from the top. Everyone who has nerve strong enough to enter it may feel as if they are floating in the air. The entire structure is made of special glass with a reduced iron content, thanks to which it has been deprived of the characteristic greenish shade. The panes are perfectly transparent. Not only walls were built from them, but also the floor and ceiling. When we entered we were asked to put on special felt slippers and to leave our backpack and phone in front of the entrance. A couple of people asked me why I had to leave my phone. The idea is to minimize the possibility of different things falling onto these special panes.

The visit to Aiguille du Midi took us about 3 hours. The ride down, on the same terms as the ascent, took about 20 minutes, except of course standing in the queues to the gondola.

As part of the purchased tickets, we had one more attraction to be included.

The next point of the trip was a mountain train that took us to La Mer de la Glace, the place where the longest glacier in the French Alps is located. It is 7.5 km long and 200 meters deep. Unfortunately, the size of the glacier is decreasing year by year. Sad sight. 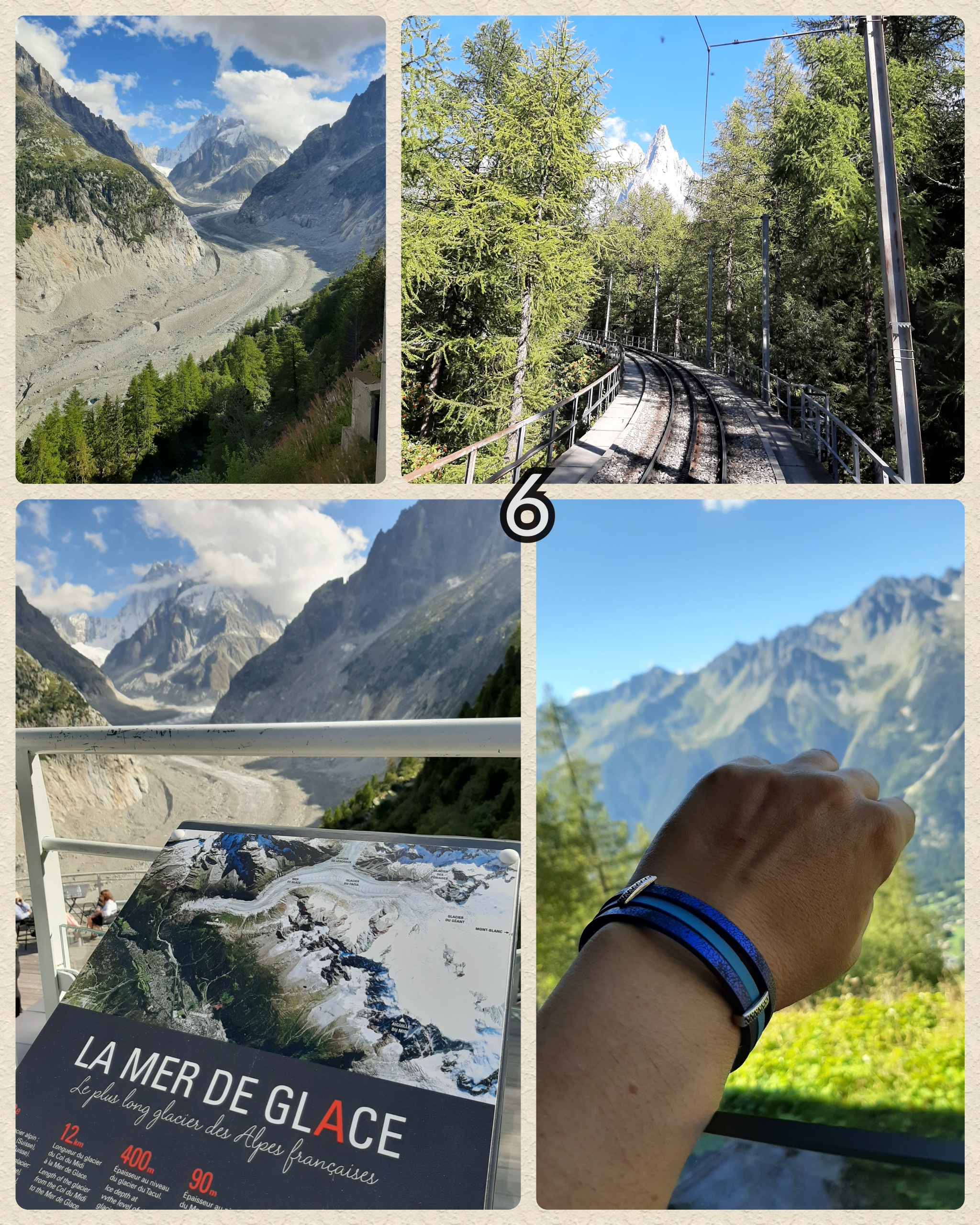 At the end, we were to visit Chamonix and eat one of the traditional Alpine dishes - tartiflette.

Chamonix-Mont-Blanc - a tourist town and commune in France, in the Auvergne-Rhône-Alpes region, in the Haute-Savoie department. It is situated in the Vallée de Chamonix valley. 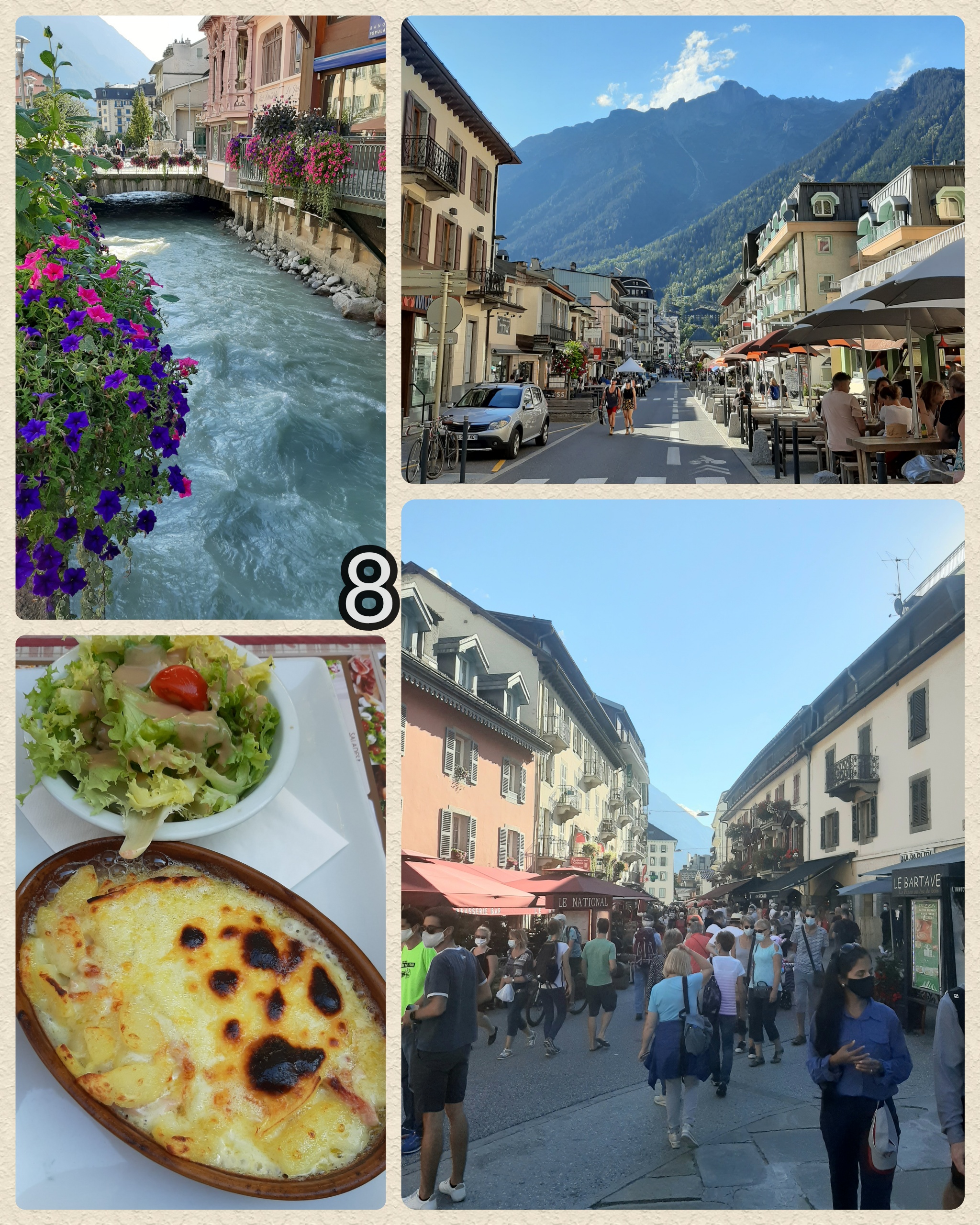 It was there, in 1924, the first Winter Olympics were held, and in 1937 the city organized the World Ski Championships. Chamonix is ​​a popular winter sports destination. is the oldest ski resort in France, it is described as a paradise for advanced skiers and snowboarders. The most popular area is the La Vallée Blanche glacier. This glacier flows from Mont Blanc du Tacul and Aiguille du Midi to the Vallée de Chamonix valley.

In summer, Chamonix is ​​a Mecca for Ski Alpine skiers. It is a type of skiing sport; a combination of winter climbing, skiing and downhill skiing in mountainous terrain with a high degree of slope.

In addition to high-altitude summer sports, Chamonix is ​​also an ideal destination for mountain biking, which is one of the more popular sports practiced in France.

The town is very charming. However, due to high prices in hotels and restaurants, it has gained the status of a very snobbish city.

Back to the tartiflette. this is perhaps one of our more favorite foods in France.

Tartiflette is a dish from the Savoy region in the Alps. Made from potatoes, special reblochon cheese, bacon and onion. In many restaurants it is also served with cream, so the whole dish is not too dry. The whole thing creates a kind of casserole, which is served in special dishes, straight from the oven.

Simple, but very tasty. Like other alpine dishes, such as raclette or founde, which are designed to quickly saturate and warm up the inhabitants of the highest mountains in Europe. 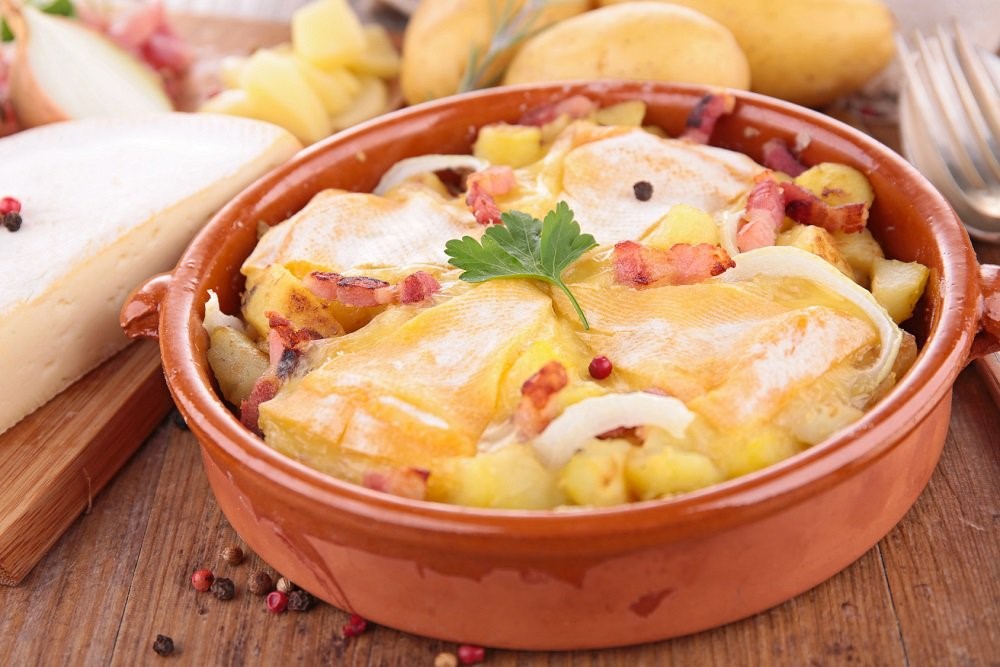 We returned home late in the evening. Very tired, but the attractions and experiences connected with them did not allow us to fall asleep quickly.

Anyone who has such an opportunity, I encourage you to spend the sixty-some euros. It's really worth being so high, losing your breath and having the highest peak in Europe at your fingertips.